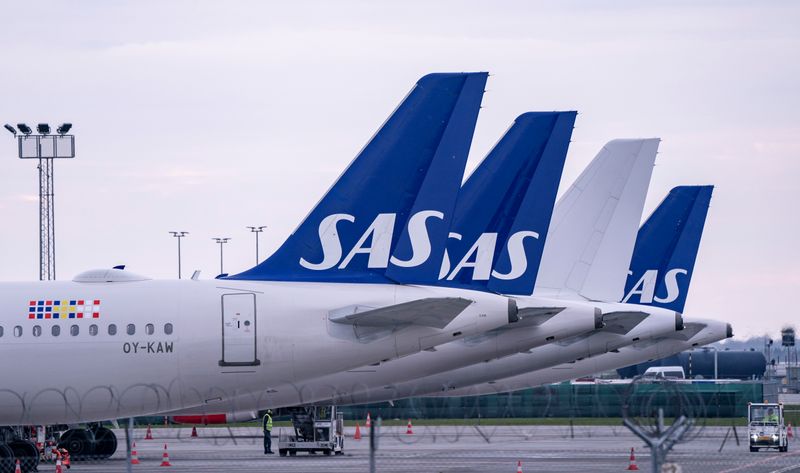 STOCKHOLM (Reuters) - SAS (ST:SAS) has reached an agreement in principle with investors to convert existing debt into new debt or shares, a vital part of the airline's plan to recapitalise and keep flying after the coronavirus crisis. The new agreement will see revised terms for the conversion of 1.5 billion Swedish crowns ($172 million) in existing hybrid notes into common shares and an option for holders of a 2.25 billion crown, senior unsecured fixed rate bond to convert their holdings into new commercial hybrid notes, SAS said. "SAS has continued to work intensively on a revised recapitalization plan and has, after discussions and negotiations with certain major holders of hybrid notes and bonds, reached an agreement in principle which has been approved by the Board of Directors," it said in a statement on Friday. SAS said it was in discussions with the governments of Sweden and Denmark, its two largest shareholders, over the revised plan and would announce further details and a timetable as soon as possible. The recapitalization will be subject to approval by the European Commission. The airline said in late June that it had agreed a 14.25 billion Swedish crown plan with top shareholders, including Sweden and Denmark, to shore up its finances. This included a discounted share issue to its main owners and a broader rights issue, as well as the conversion of the outstanding bonds and hybrid notes into shares. But SAS had to restart negotiations with bondholders who were not expected to agree to the initial terms. The new agreement also includes an increase in the interest rate on 6 billion crowns of state hybrid notes that SAS will issue to major shareholders.